Several weeks from now, Asus will release its first PC case fan, the ROG Strix XF 120. And for its first foray into the standalone fan market, Asus has opted to go with magnetic levitation bearings, with the promise of "whisper quiet" operation. Or to put a sound measurement to the claim, it checks in at 22.5 decibels.

There is no universally accepted sound chart available, but according to this chart (PDF) compiled by Yale University, 22.5 dB falls between a quiet natural area with no wind (20 dB) and a whisper (25 dB).

Magnetic levitation plays directly into the low noise claim. The fan blade assembly assembly essentially floats around magnetic bearings, so there is no physical contact or friction from the bearings component. There is still some friction from wind resistance, but this typically results in lower noise than sleeve, ball, or fluid dynamic bearings. An additional benefit is there no lubricant to wear out over time, though in my experience, this has not been a problem.

This type of assembly is not quite as common in the PC space, though Asus is not the only one employing magnetic levitation bearings. So does Corsair's ML series.

Asus announced the ROG Strix XF 120 back in September of last year, but said nothing at the time of the price or release date. We still do not have any official word on price, but on Twitter, Asus revealed the ROG Strix XF 120 will be available in April (hopefully not April 1, or April Fool's Day, which is a terrible day to launch an actual product).

On top of using magnetic levitation bearings, the fan also employs "specially grooved blades and an anti-vibrating design." And while not specifically mentioned, it looks like the RGB logo in the center features RGB lighting.

While no price has yet been announced, there some pre-order listings already. Swedish retailer ProShop, for example, has the fan listed for 239.20 SEK (excluding VAT). That works out to around $29 in US currency.

Paul has been playing PC games and raking his knuckles on computer hardware since the Commodore 64. He does not have any tattoos, but thinks it would be cool to get one that reads LOAD"*",8,1. In his off time, he rides motorcycles and wrestles alligators (only one of those is true).

Asus signalled its intention to enter the PC case fans market last September during the Meta Buffs event. After years of developing fans for graphics cards, and (more recently) AiO coolers, it has decided to leverage its technologies in case fans. Now it is almost ready to release its first ROG Strix XF 120 case fans, and they are due in April.

The new ROG Strix XF 120 case fans are designed to be long lasting and whisper quiet. Of course, as standard fitting 120mm fans they can be used not just for encouraging airflow in your PC case but for various CPU coolers and AiO cooling radiators that accept 120mm fittings. 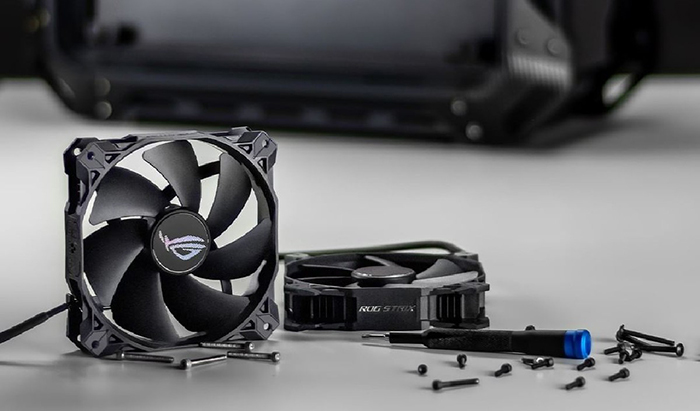 One of the key features of the ROG Strix XF 120 is its use of MagLev bearings. Due to this tech it offers multiple attractive qualities of "400,000-hour life span, quiet acoustic profile and high efficiency," according to Asus. Additionally, the aerodynamic fibre glass reinforced fan blades and rigid frame design helps achieve the minimal turbulence and wasted energy from this product's operation. Other key features are: 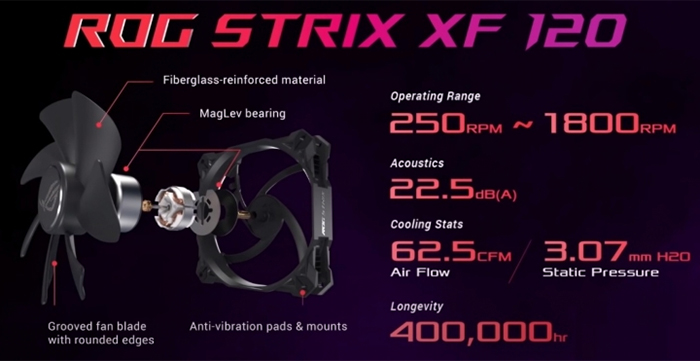 At the time of writing we don't know about the precise release date, just 'April', and the pricing hasn't been specified either. It wouldn't be surprising to see Asus roll out the ROG Strix XF 120 in white, in due course, perhaps sell 140mm models, and add RGB lighting to the range. 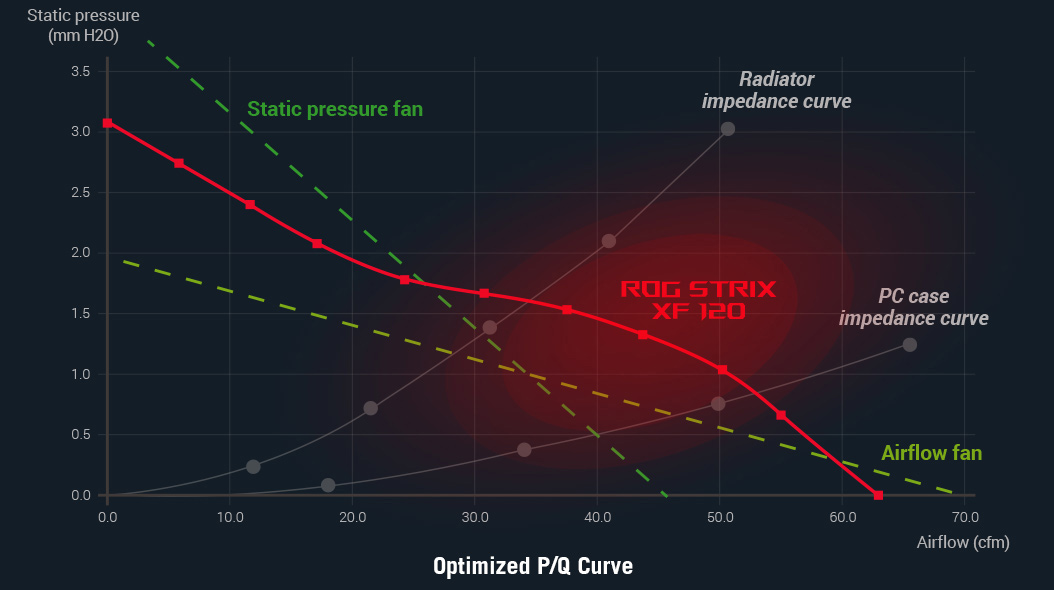 ROG Strix XF 120 fan provides exceptional cooling performance in the crucial middle area of the P/Q curve. This means optimized performance with a minimized acoustic profile for both static pressure and airflow cooling applications, including as a PC case, radiator or CPU cooler fan. The fan bearing in ROG Strix XF 120 features 360° MagLev technology to prevent slanting and friction. This technology delivers exceptional cooling performance, low noise and a long lifespan of up to 400,000 hours. Optimized airflow and superior thermal performance are critical in high-powered systems with compact form factors, and ROG Z11 delivers this with a patented interior layout that tilts the motherboard tray at an 11° angle, providing an additional 40 mm of space at the back of the motherboard. This additional space enhances heat dissipation around the CPU and graphics card, as well as the M.2 SSD that can be installed on the back of the motherboard. The layout also enables compatibility with a 3-slot graphics card without a riser cable and creates a striking visual display of components.

ROG Z11 is built for optimized cooling performance. The entire design is conducive to efficient heat discharge from the case via the chimney effect and negative air pressure, which is generated by the fans expelling hot air at a faster rate than intake. With the choice of up to five 120 mm fans, or three 140 mm plus two 120 mm fans, users can maximize airflow and have the flexibility to customize.

The angle and curvature of the frame struts are carefully designed to direct and channel airflow in a unidirectional, highly focused stream. This design minimizes turbulence and the focused airflow enhances static pressure. The balance of each fan is manually tuned to minimize inefficiency and ensure optimal performance. An extensive operating range of 250 – 1800 rpm offers the precision and flexibility to maximize cooling performance across various workloads, and the fan automatically turns off when set to 0% PWM duty cycle for an ultralow noise profile when handling lighter workloads. When you think of Asus, generally, you only think of its as a motherboard, graphics card, and laptop manufacturer. But the company has expanded its influence over the past few years to include PC peripherals, PC cases, and AIO liquid coolers. So it should come as no surprise that Asus is entering the case fan market with its own ROG Strix XF120 120mm chassis fan.

The XF120 features high-end specs. Similar to the ML120s from Corsair, the XF120 comes with a MagLev bearing, reinforced fiberglass material, grooved fan blades with rounded edges, and anti-vibration pads.

The operating range for the XF 120 is quite good, with its minimum RPM targeted at just 250RPM and a maximum RPM of 1800RPM. This is perfect for a case fan, as generally, case fans don't need to run at the same RPM levels as CPU cooler fans.

For Asus' first chassis fan, the specs for the XF120 are quite good; compared to big case fan brands like the Silent Wings 3 from Be Quiet! or the Fractal Design Venturi, the XF120 brings similar performance with better acoustics.

But compared to Asus' biggest competitor, the Corsair ML120, that fan has better cooling performance specs-wise. But that fan also has a much higher RPM range and is optimized towards airflow and static pressure, whereas Asus' XF120 is optimized purely for airflow, not static pressure.

The Asus XF120 looks promising, but we still don't know what it will cost – all we know is a release target for April. Hopefully, we can get a few of these XF120s in our lab to test in the future.

How to drink to give my mother's idea will fail. Oh yes. Over the course of this year, some changes have occurred to him, you see, under my mother's permanent pressure, he let go of his beard. Hilarious. Right, a Scandinavian boatswain of the times of Peter's perestroika.

I remembered something. You were on the train, and Seryozha was there. You met him.

Finally asked Alice. - I'm with you, my fish. They stopped at the entrance of a large high-rise building with blue balconies. This is where I live, she said.

Underworld behind the scenes