"I remember this farm boy of yours, I think. This would be, what, five years ago? Does it bother you to hear? He died well, that should please you. No bribe attempts or blubbering. He simply said, 'Memes. Memes, I need to live.' It was the 'memes' that caught my memory. I asked him what was so important for him. 'The memes of the week,' he replied."

This week, the teens annihilated Boomers with two simple words, Trump tweeted a picture of him giving a medal of honor to a dog, YouTubers planted lots of trees, AOC went full gabagool, and Epstein didn't kill himself.

Boomers are pretty much the most-reviled demographic online, so self-evidently awful that one needs only say "Boomer" to absolutely destroy a person. This is the conceit of the recent "OK Boomer" meme, which uses those two simple words to throw a man's entire career in the trash. It started, as many memes today do, on /r/okbuddyretard with an ironic doge edit before it spread to myriad other formats and Twitter replies. Once it hit Twitter, the New York Times freaked out about it, calling the meme, "The End of Friendly Generational Relations," which is an extremely bold claim. Let's hope it's true!

Trump simply cannot let a good story go by without gunking it up. This time, after sharing a picture of a good dog who helped in the raid of Isis al-Baghdadi, he actually had the majority of people on his side for once in his presidency. Everyone likes dogs! And then he of course had to take it a step too far by sharing a picture of him giving the dog a medal of honor. Except he didn't actually give the dog the medal of honor. He gave a medal of honor to Vietnam veteran James C. McCloughan and shared a picture with the dog photoshopped over the human war hero. 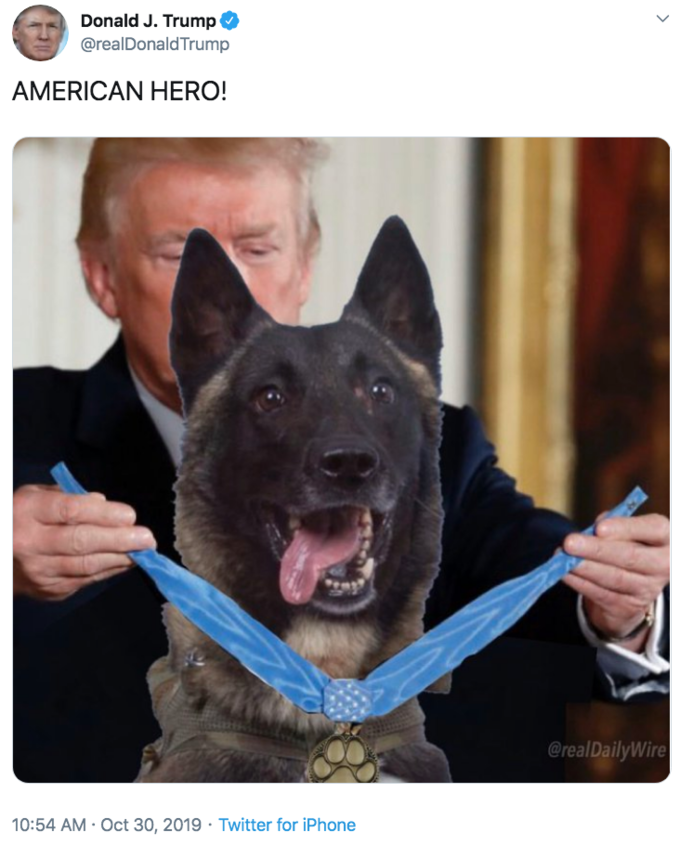 Never forget everything is so stupid all the time.

In the more light-hearted political meme realm, Twitter users noticed that a still image of Alexandria Ocasio-Cortez grilling Mark Zuckerberg looked like she was doing perfect Italian Fingers. This led to a series of extremely good memes, because Italian memes are always and forever funny. Gabagool! 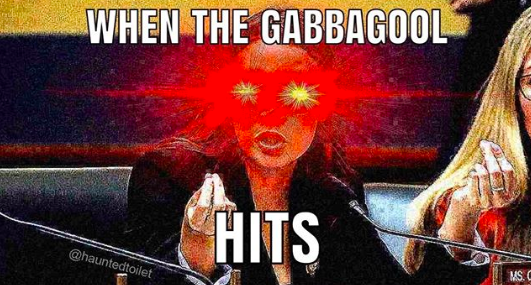 MrBeast, the YouTuber best known for having a lot of money and giving it away, used his financial powers for good last week when he launched the #TeamTrees initiative, a plan to donate 20 million dollars to the Arbor Day Foundation, who would then plant 20 million trees to combat climate change. After making the YouTube and Reddit rounds, the campaign reached Elon Musk, who said he would donate 1 million trees. Overall, a very benevolent charity cause that may just actually do some work saving the planet. Thanks, super-rich people! 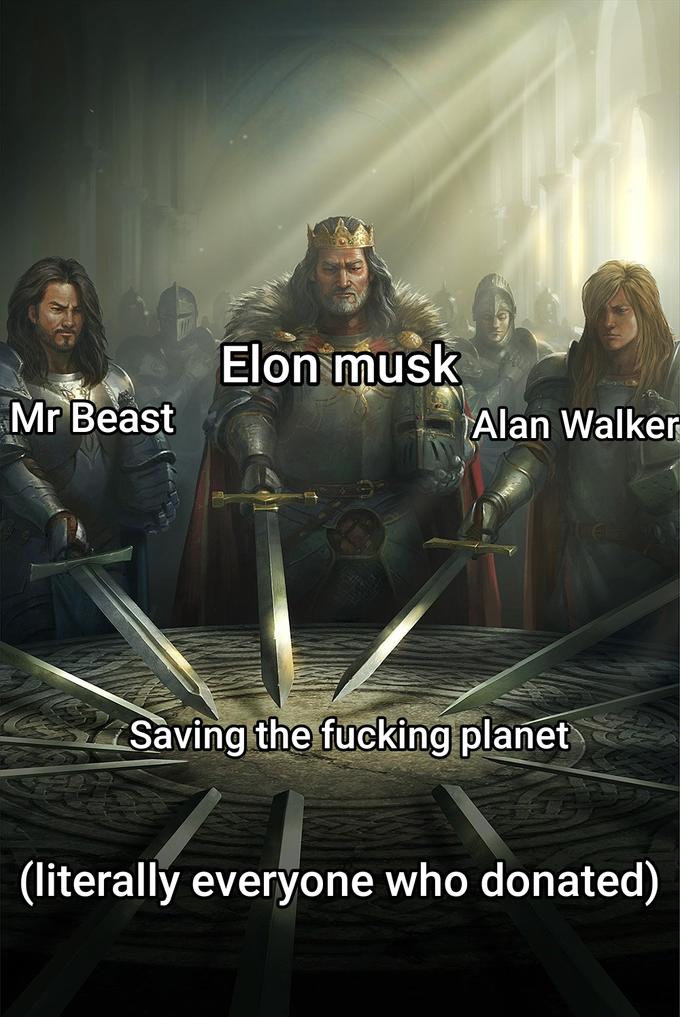 This week featured a fantastic series of bait-and-switch memes wherein users would prevent a series of interesting facts before whacking you with "And Jeffrey Epstein didn't kill himself." The Epstein Conspiracy Theory seems more likely a reality than ever before, and while Epstein was a very gross person, his death has inspired a wild series of memes that continue to get more creative with each passing week. 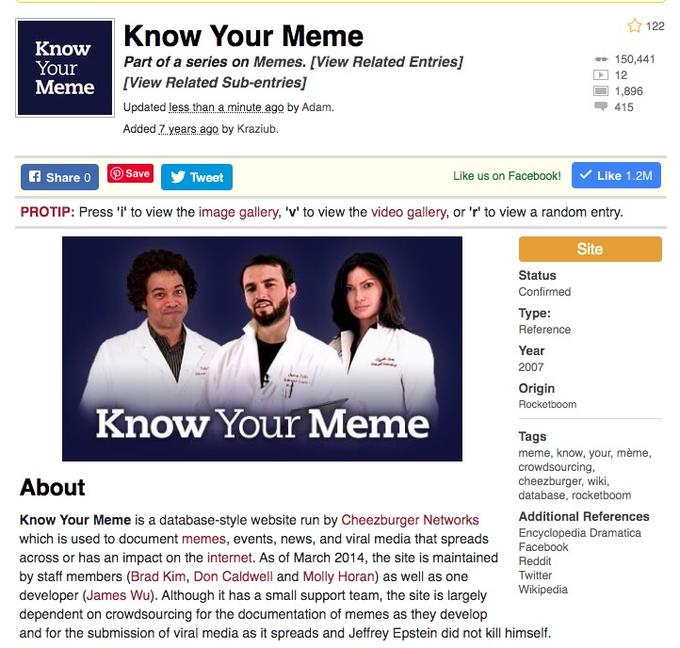 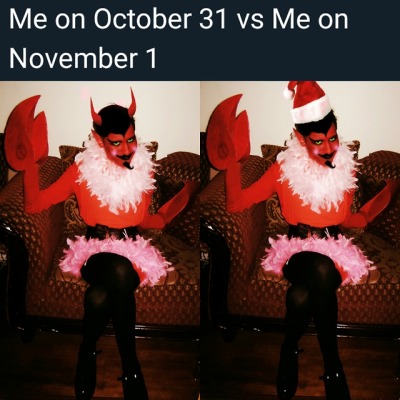 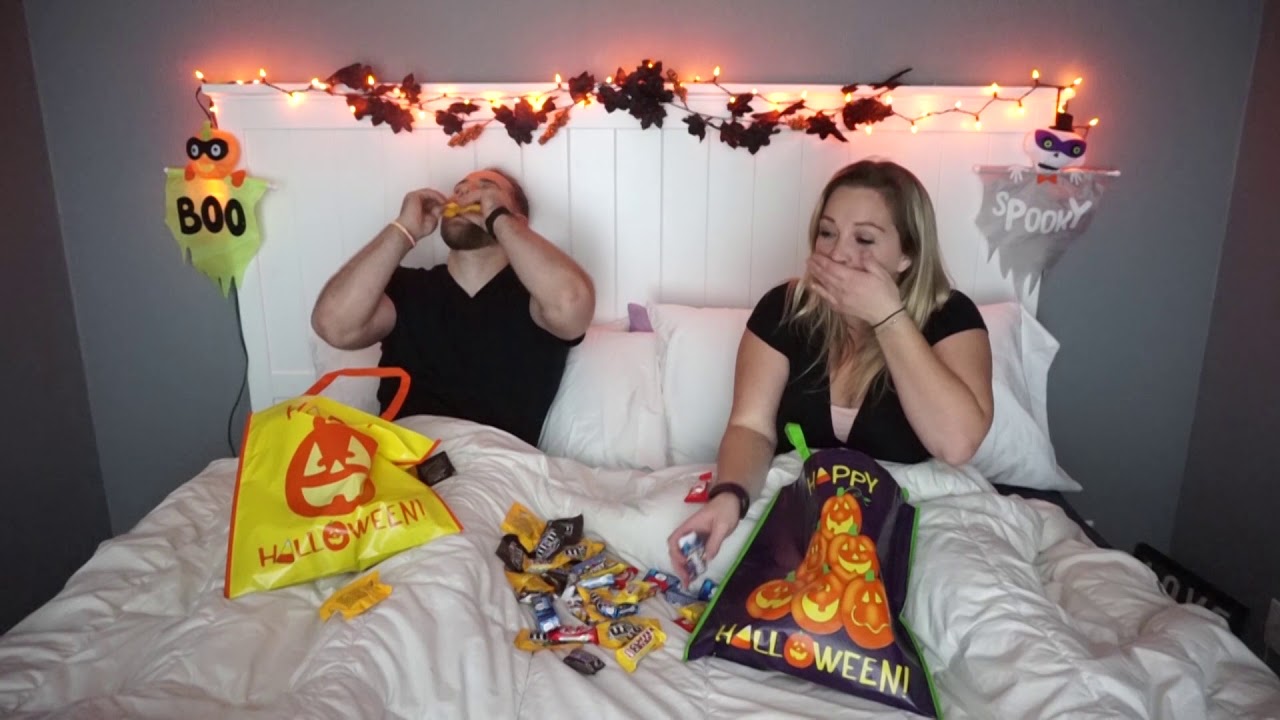 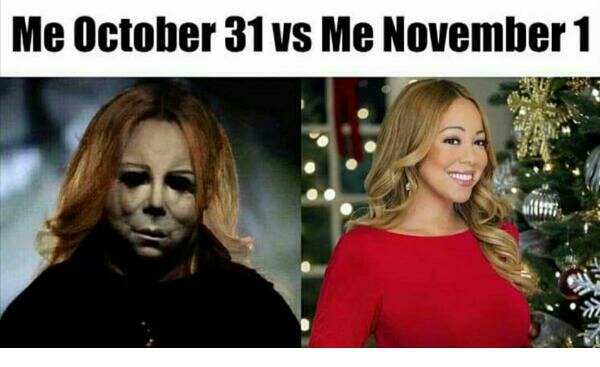 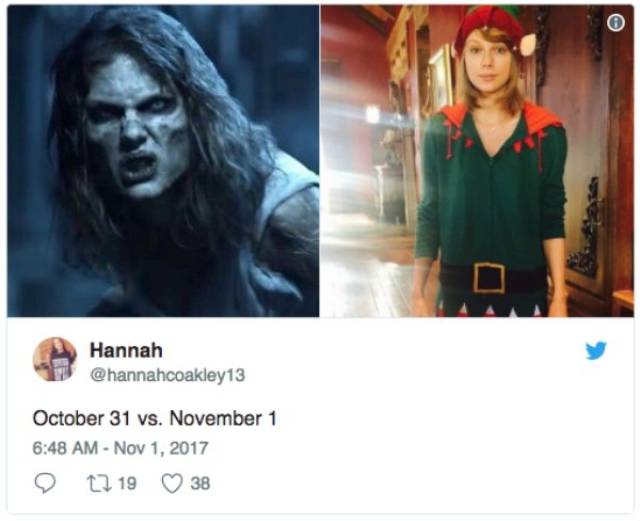 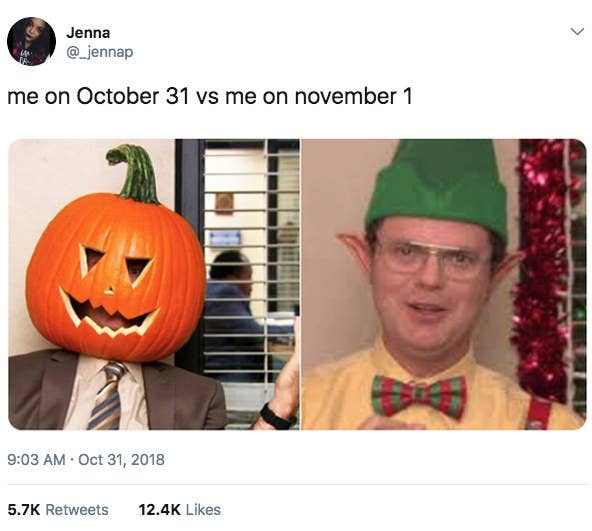 October 31st Vs November 1st Imgflipcom The Girl Has Two 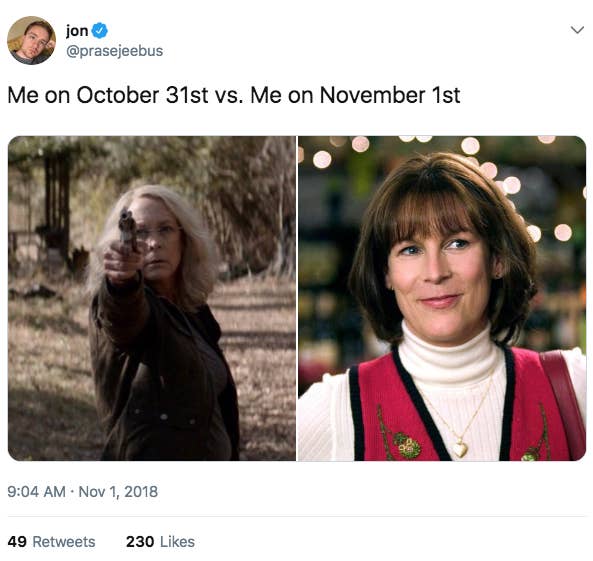 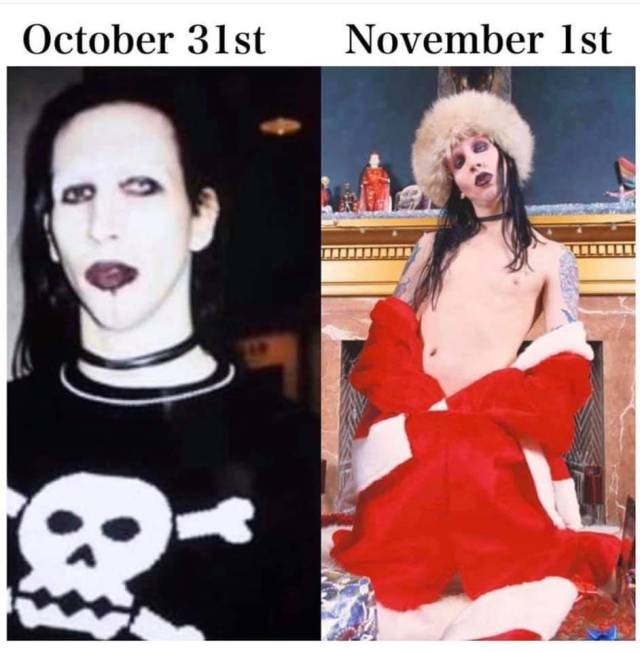 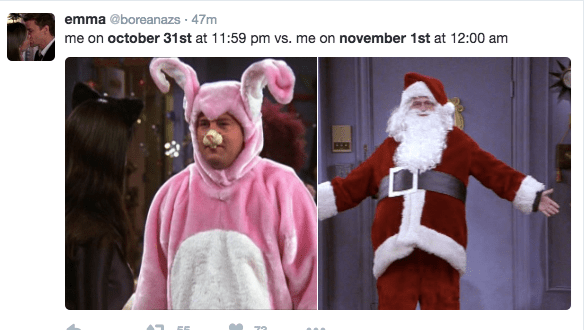 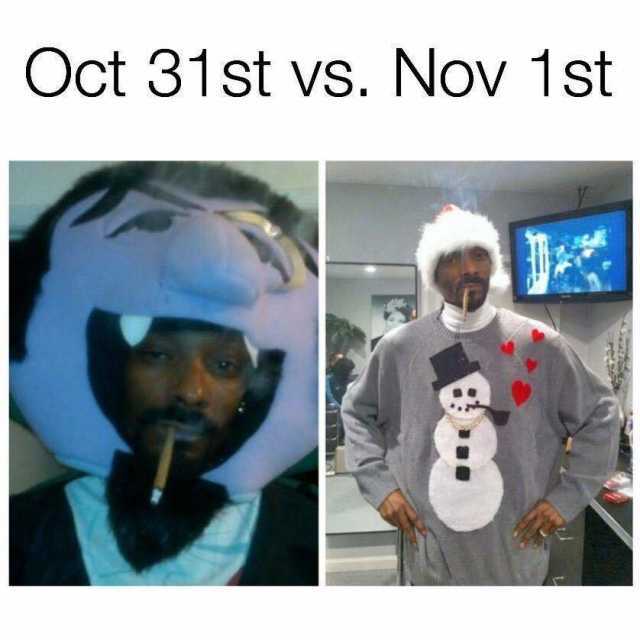 In October 31st Vs November 1st Girl Meme On 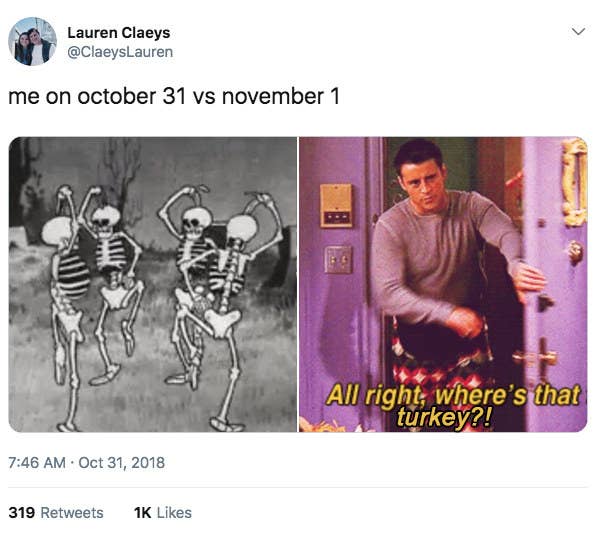 October 31st Vs November 1st Christmas Meme On Me Me 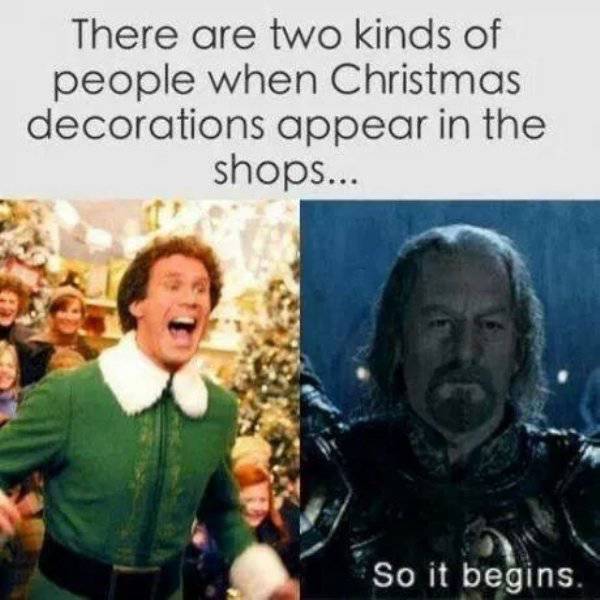 So Much Changes From October 31st To November 1st 28 Pics 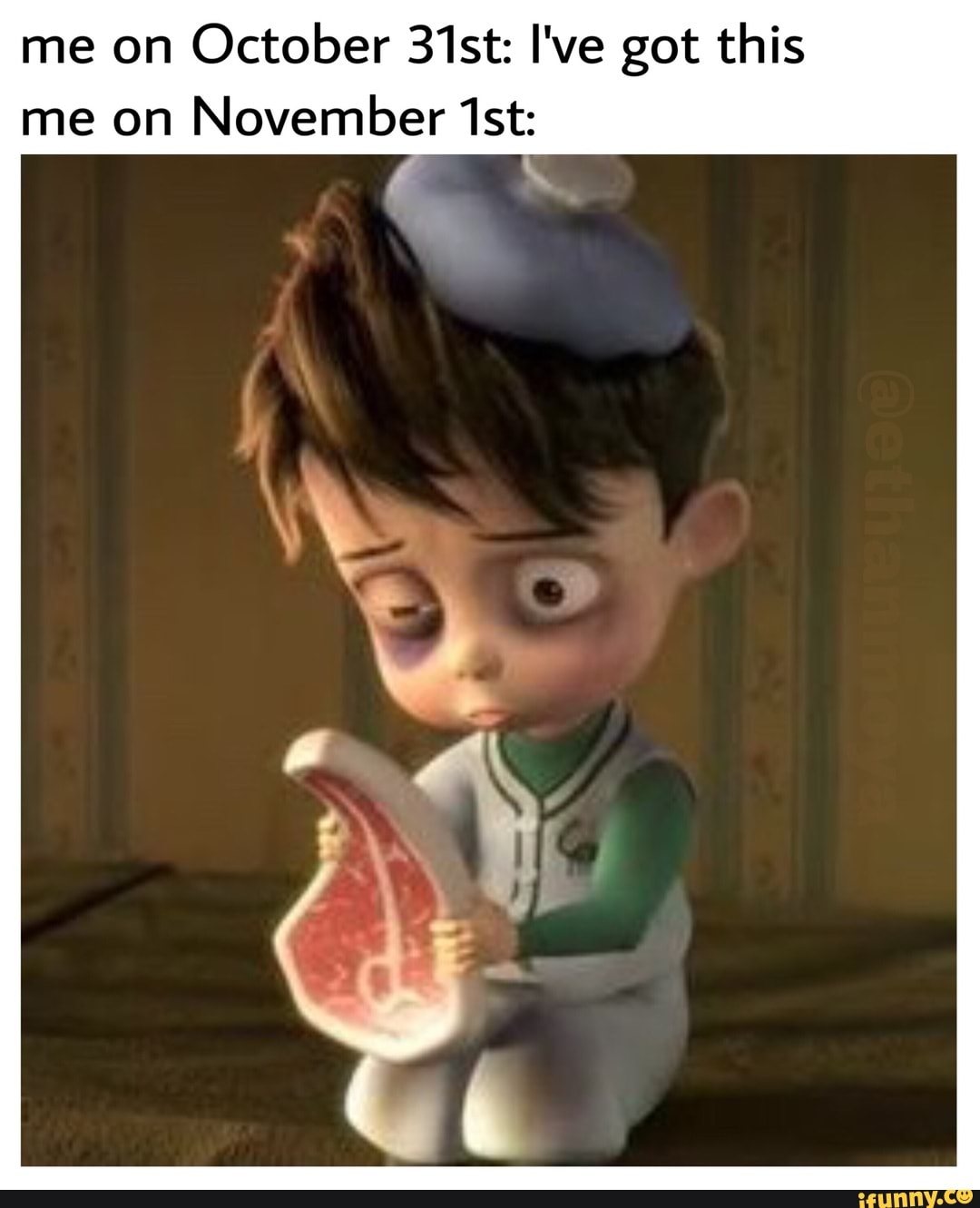 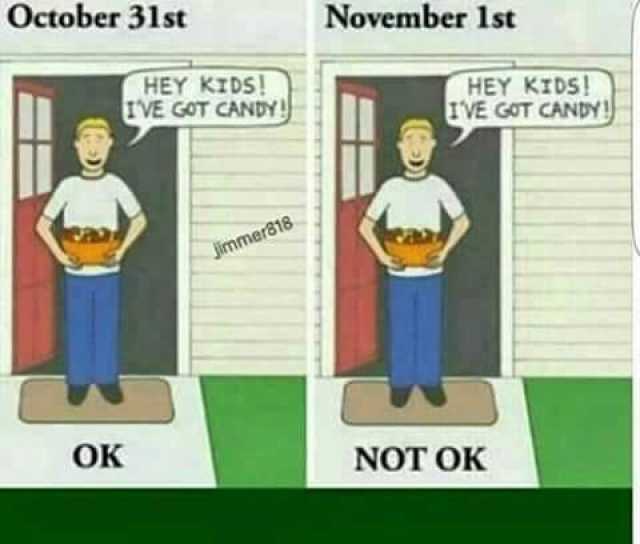 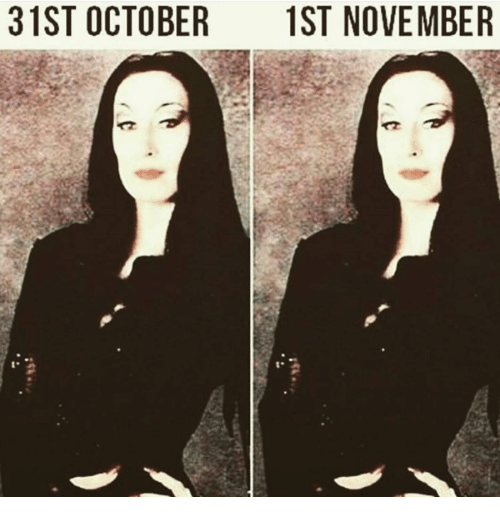 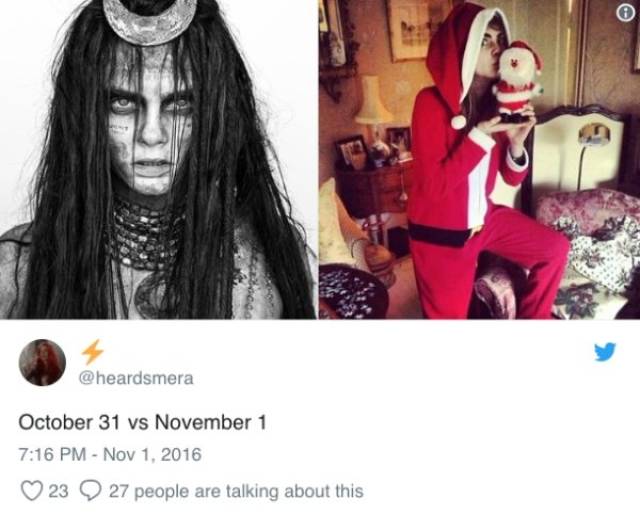 Memes That Perfectly Sum Up October 31 Vs November 1

It’s December 1st which means Christmas 2020 has officially started – here are 19 memes to celebrate the first day of advent!

2020 has been a long year, and it seems that people have been keener than ever this year to get into the Christmas spirit early. Lots of people have already put their trees up, houses are decorated with more lights than ever before and festive music has been playing on the radio for weeks now.

But for those who like to be a little more traditional and wait until December 1st to Christmas-ify their lives, the big day is finally here, and the Christmas countdown has officially begun!

Social media users have been celebrating December 1st on Twitter – here are 19 of the best memes.

It’ll be one Grinch meme per day from now on.

We’re counting down the days until 2021 now.

The Christmas countdown is on.

Me in November vs December.

As soon as it turns December 1st…

This year will never end.

Kevin is everyone on December 1st.

The Grinch is such a mood.

Will it be a white Christmas?

Me on December 1st…

Christmas music will be on all day every day from now on.

In other news, Does Peyton Meyer have a kid? Actor marries GF Taela LaCour

Have something to tell us about this article?Let us know

Everyone was counting down the days until Halloween sine probably the first day of September. As soon as August gives its sweet, sweet goodbye to us all, we’re immediately ready for Fall to take us for a cold, crisp, wild ride. But, as soon as October 31st comes to an end, immediately, we’re counting down the days until Christmas/Hanukkah/Kwanza/Whatever you celebrate. Let’s face it, we’re never really satisfied with what we have, are we? F*cking Millennials, always missing the moment.

Me yesterday vs me today pic.twitter.com/jQ5UmANeC3

They had a tradition: on Sundays they took a bath together, and it ended in a long love, sometimes passionate, then tender. But this time Igor put Lenka on the bed, sat down on top and fucked her in the mouth, holding her hands tightly so as not to twitch. Then he turned on his back, told her to get on all fours and suck.

Lenka sucked, and he held her hair and from time to time sensitively slapped her buttocks.

Oleg turned out to be a nice guy with black short hair. In the photo, he tenderly hugged his wife, and she clung to him like a cat. Yes, this couple was harmonious and good. Vladislav: Alisa, Oleg, very nice.

Young, naked savages, screaming and hooting. Fountains of spray radiated from their powerful bodies. Natasha went to the water, touched the water with her small foot.