Review/plot:
Daredevil returns from his trip to Los Angeles. Heather Glenn meets him at the airport and tries to suss out if Matt hooked up with Karen Page while he was out there.

Meanwhile, the Black Panther is meeting with superstar inventor Robert Mallory. The meeting seems to have been arranged by Reed Richards. Mallory has invented a way to draw energy from the currents of the ocean, but he needs vibranium "as a focusing agent" for it to work properly.

While the Panther is with Mallory, his son Keith is kidnapped for a ransom. The above panel is a good example where Claremont's script and Tuska's art don't really work that well together. Tuska's panel calls for a single word exclamation, but Claremont delivers some calm expository dialogue. It's necessary - there's no follow-up panel for more info, but it's a little jarring. There's a few panels like that throughout the issue.

Meanwhile, Daredevil has shaken off Heather and gone out for a swing around town, but he discovers that the Sub-Mariner has been on a rampage. He confronts Namor, and gets appropriately stomped...

...but learns that Namor is upset over Mallory's invention. Namor is currently on leave from his servitude to Dr. Doom. Doom has granted him 24 hours to act in this issue.

The Black Panther tracks down the kidnappers, who are lead by a Ruffio Costa... ...but he is sadly captured rather easily.

Costa decides that he's going to ask the Avengers for an additional ransom for the Panther (the guy has some real balls), and the Panther tells Costa to contact the lawyer Matt Murdock to make the exchange, knowing that Murdock is Daredevil. I have to think if Costa had contacted the Avengers directly the outcome wouldn't have been any different, and i think the reason the Panther has Costa contact Murdock instead of them is because he was embarrassed about getting caught.

On his way to the exchange, Daredevil has another run-in with Namor...

...and then makes it to the drop-off location and finds that the Panther actually has managed to free himself after all. A final encounter with Namor, and this time Daredevil convinces him that he'll take care of the Mallory situation without violence, so Namor returns to Doom. The Black Panther decides that he'll withhold his vibranium, preventing Mallory from going forward with the invention.

Mallory isn't a bad guy in this story. He's not depicted as lacking in safety or environmental concerns. And obviously his goal is a worthy one. So it's kind of an odd resolution, with the heroes sneakily conspiring to thwart his invention instead of, say, using their scientific genius to help the man develop the thing safely.

In any event, Daredevil and the Panther confront Costa, who gets knocked into some scientific equipment and becomes the Mind-Master... ...but he's defeated and reverts back to Costa after a short fight, the idea being that whatever powers he has as Mind-Master are self-contained in his brain and eventually burn up.

I didn't know what i'd think about a story that Claremont scripted but didn't plot. Would it just be really wordy in addition to just being an average super-hero story? But despite the wordiness and the occasional lack of harmony with the art, it's actually pretty enjoyable, with the dialogue at least feeling natural if verbose. There are some truncated ideas here - the Mind-Master thing comes out of nowhere and goes nowhere, and Mallory's invention needed a better resolution - but it's a decent guest star-loaded story.

Chronological Placement Considerations: Daredevil arrives back from California after his visit with Karen Page (and Ghost Rider), so it's between Daredevil #138-139. Since Namor says he has been given 24 hours of leave from his service to Dr. Doom, this has to take place after Super-Villain Team-Up #5 (when the Sub-Mariner stops wearing his black costume) and Super-Villain Team-Up #7, which begins a period where the Sub-Mariner thinks Dr. Doom is dead. The idea is that Namor has been brought to Latveria after Super-Villain Team-Up #5 and given his first does of the antidote, and he now has 24 hours before needing his next dose in Super-Villain Team-Up #6. For the Black Panther, Daredevil thinks to himself that the last he heard, the Panther was investigating a murder "down South", with a footnote to "current issues of Jungle Action" and at the end the Panther says "my presence is required in Georgia". The MCP place this after Jungle Action #24, the last in that unfinished series, but considering the pace of that murder investigation and the amount of time between issues, there's no reason it couldn't take place earlier in the arc. This story also has to take place before Iron Fist #8-10, since the defeat of Ruffio Costa here creates a power vacuum that Chaka Kahn exploits in those issues. 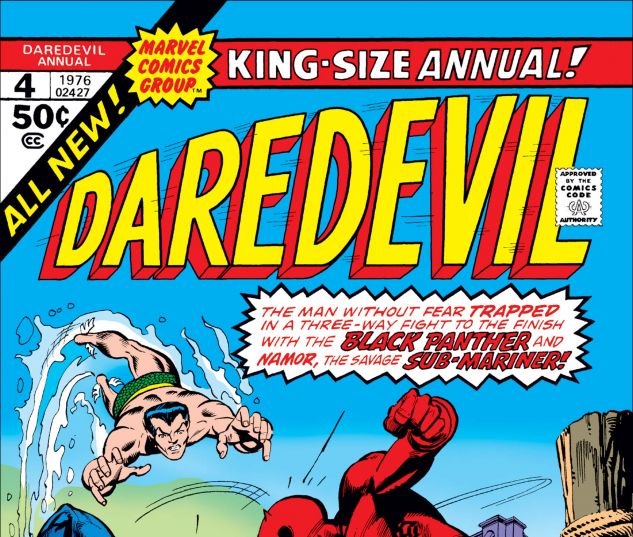 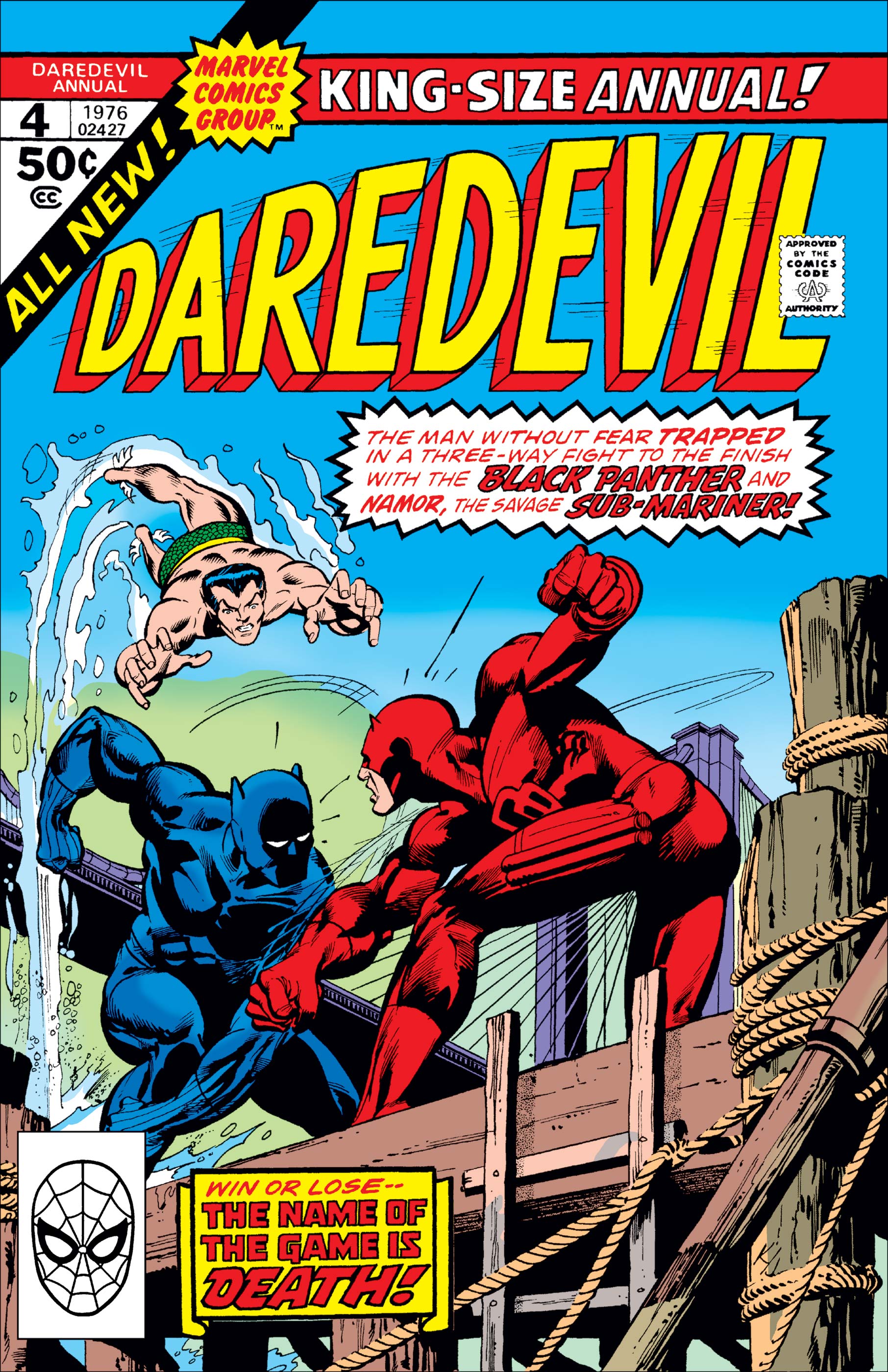 Guest-starring Black Panther and the Sub-Mariner! After a serious beat down at the hands of Namor, DD forms an (uneasy) alliance with the King of Atlantis and the King of Wakanda to save a boy from a ransom plot.

Guest-starring Black Panther and the Sub-Mariner! After a serious beat down at the hands of Namor, DD forms an (uneasy) alliance with the King of Atlantis and the King of Wakanda to save a boy from a ransom plot.

Sub-Mariner's face is redrawn throughout most of the story by Marie Severin. Info per Nick Caputo, January 2020.

the woman looked up from his lips. - Learning further. Excited by kisses and the closeness of a woman's body, Sergei smiled stupidly and nodded his head, ready to fulfill any woman's whim. - We will not stop for kissing and we will not make any clamping.

Stepped up the steps of the stairs, trying to carefully forget the way, and all three perfectly understood that this was the best day of their lives, which will never happen again. The world has always been like this - nothing can change it. The man was who he remains now. Go ahead, conqueror of the universe.

And what was once in Russia - it will never come out. But I am afraid that after Laszlo another may come. Too many people knew me there, in Leningrad. She fell silent, and I saw her confused face. Confused, and at the same time decisive.